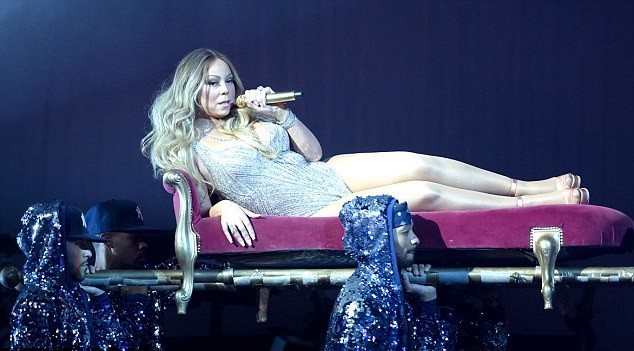 Despite the fact that this is a remarkable huge sum of money, it does not really come as a surprise to some because Mariah Carey has one of the most distinguishable voices in the music industry ever since she started singing. In fact, to date, she has sold over 200 million records across the globe!

From the look of things, the exquisite songstress of hits such as Touch My Body does not take any chances when it comes to ensuring that nothing happens to her melodic singing voice. According to a recently released report, sources indicate that she has bumped up the insurance policy cover of her bewitching legs and her angelic vocal chords. Either of them is now insured at an outstanding $35 million, which brings it to a total of $70 million!

This upgrade of the insurance policy amount on her body parts comes after addition of a few extra dates to her sensational Sweet Sweet Fantasy World Tour. The 46-year-old musical virtuoso is currently making some performances in Eastern Europe and apparently, she risks losing millions of dollars in profits should anything go amiss in the course of the set additional shows.

The Princess of pop music has always been known to make some of the craziest demands while o her tours and she always gets her way! Reports indicate that currently, she spots a minimum of 11 bodyguards so that she is not seen by fellow diners while she is enjoying her meal.

One time, Mariah, the mother of twins asked for an antique table worth £50,000 before she could begin a session of signing autographs for her fans. The table had to be flown to London from New York just to make meet her comfort needs.

When it comes to Carey’s bedtime arrangements, the singer makes a demand of 20 humidifiers in the bedroom where she is to sleep in a bid to encourage a rainforest-like environment. She said that this essentially makes it similar to having your nighttime nap in a steam room. And that is still not all; Mariah also said ‘’The bed is all toweling cloth, the ceiling is sloped so the water can’t fall on my head and it drops down to my side. My TV is behind glass.’’

With these personalized demands, it is easy to assume that her live shows were effortlessly smooth, but then, it’s quite the opposite for the dazzling performer. At one time, not so long ago, she made thousands of anticipating fans wait for almost an extra hour before making her appearance on stage in Leeds, according to a tweet she posted, she found it a bit difficult to leave her super comfy bed at Corinthia in London.

Well, it is clear that no one would wish to miss any of her breath-taking performances or appearances and her demands are always met. On the insurance costs, some are still wondering why she hasn’t insured any other part of her body, like her gorgeous ass for example, just like her fellow stunning performer J-Lo. Perhaps she might still do it, you never know!