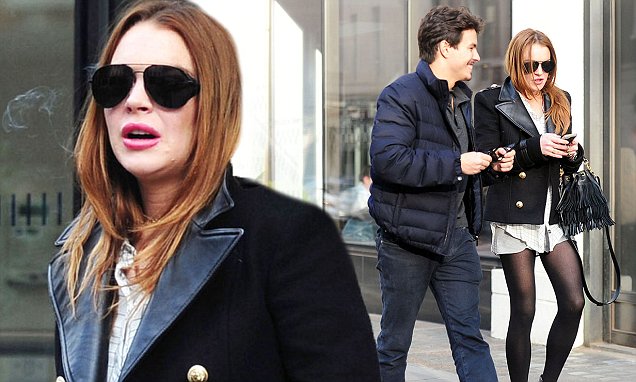 Lindsay Lohan has been seen showing off a ring which was quickly assumed to be an engagement ring she received from her 22-year-old Russian beau, Egor Tarabasov. The gossip was also further fueled up by the fact that the duo has been dating for more than eight months now and they are reported to have moved in together about a month ago. This came as a surprise to many since her dating life has been a total mystery in the past five years.

Egor, the son of a multi-millionaire businessman and 29-year-old Lindsay met through mutual friends at a party and they swiftly hit it off. Lohan said that she met him in the summer of 2015 and she was really happy because Tarabasov is a great guy. On the gentleman’s side he is also quite taken by multi-talented celebrity and he spends as much time as he can with her. Reports also indicate that Egor spent the holidays with the Herbie actress and her family in New York. The family members present included Lohan’s sister Ali and her mother Dina.

Sources pointed out that despite the younger age of Tarabasov, he has proven to be more mature than his age and he is a good influence on Lindsay who will hit the age of 30 on the 2nd day of July this year. The couple has been travelling all over the world and they are entertaining their fans with lots of pictures that are proof that their escapades are quite lovely!

When Lindsay was asked about the supposed engagement, she denied it completely and pointed out that the stories are baseless! So, they are not there yet, at least that is what Lohan revealed.

The redhead has had a history of lots of high profile relationships but it has never been to the point of engagement. She is known to have dated Calum Best, Brandon Davis, Wilmer Valderrama and Harry Morton and she has also had a few flings on the way with stars like Jamie Dornan and Jude Law. The most notable one was possibly the two-year relationship with DJ Samantha Ronson. Even though it lasted that long, it was still an on and off thing.

Lohan’s first acting gig was when she as a child and the first time she ever rose to stardom was in her role in The Parent Trap, a 1998 motion picture where she played twins, one British and one American. After that, she became quite successful as an actress up until 2007 when things fell apart. She was a frequent wild-nighter at West Hollywood clubs and she underwent a number of arrests, a DUI and even jail time.

She went through rehab later on and in the past four years, the redhead has spent a lot of time in London where she managed to stay away from her usual troubles. Back in 2004, Lindsay admitted in an interview that staying in London has helped her a lot for when she was back in LA she just found herself going out every other night and the paparazzi kept following her everywhere!